Recently I was browsing through social media and had occasion to recall that the essential documents and rituals of our tradition teach many things about how Masons should conduct themselves. For its universality, the only example I now reference is in Section Five of Anderson’s Constitutions of 1723: “The Craftsmen are to avoid all ill Language, and to call each other by no disobliging Name, but Brother or Fellow; and to behave themselves courteously within and without the Lodge.”

This reflection began when I ran across a user’s profile that included a picture of him wearing a lodge officer’s jewel, and many of his posts revealed that he was proud to share his involvement in Masonic activities. The reason I had been looking further into the man’s profile was because I had stumbled across posts by him that shocked me, and I don’t feel shocked very easily. The posts were filled with hostile insults and obscenities directed at another Mason, as well at the second Mason’s non-Mason friend. All of that was further amplified by the fact that “Bro. Ruffian” had jumped directly into such un-Masonic behavior without anything of the sort having previously occurred in the conversation. In other words, there had been no escalation involving the other two parties, and they had actually attempted to keep their disagreements civil. Furthermore, none of his diatribe was written in jest, but was clearly meant to be nasty, intimidating, and hurtful. Bro. Ruffian used ugly terms that were disparaging of an ethnicity, a religion, and the non-Mason’s womanhood. In looking through some of his other social media posts, it was obvious that such behavior was common for him.

Sadly, Bro. Ruffian is not unique in that respect, and such behavior happens far too often. It suggests that Masons like Bro. Ruffian either do not know or do not care that their behavior violates the virtuous standards inculcated by our tradition. Aside from whatever his personal circumstances may be, it is also clear that a lodge has failed him in one of three ways, if not some combination of them.

First, the lodge had a duty to interview and investigate him before he was accepted for initiation, carefully contemplate their findings, and act accordingly on his petition. I find it doubtful that his bigoted attitudes and hostile behavior were not already in place at that time. If they were in place, the lodge should have discovered it, clarified that he had work to do before becoming a Mason, and offered to help him. If those attitudes and behaviors weren’t already in place, then he either joined a very careless and inattentive lodge that ignored a newly developing problem, or a very toxic lodge that actually encouraged that development. In any case, the lodge didn’t live up to its obligations to him or to the Fraternity.

Second, the lodge may not have properly educated Bro. Ruffian about Masonic standards. By “properly educated,” I mean that a lodge should do more than put a man through ceremonies teaching about social and moral virtues and have him vow to uphold them. As a candidate, he should have been informed that developing in virtue is at the core of Masonry’s philosophy and lifestyle. He should have been encouraged to contemplate his own behavior and clarify for himself how he might learn and grow in such ways. He should have been told that his lodge would expect him to work at that learning and growth, and that the brothers would support him and hold him accountable in doing so. All of these steps should have been taken as part of his education before he was ever allowed to enter and be initiated.

Third, the lodge may have failed in monitoring, contemplating, and responding to his progress, or lack thereof, in Masonic education and behavior. If he actually held the office associated with the jewel worn in his profile picture, then he has already been through the three degrees, and may have already advanced through more than one office. How is it that in all the time such a journey should have required, Bro. Ruffian has been permitted to behave as he does and not be held accountable for it? No member of our Fraternity, no matter how badly a lodge needs members or officers, should be allowed to progress to degrees or titles that deserve more dignity and respect than his personal knowledge and behavior warrants.

Now please don’t misunderstand me. I am not saying Masons shouldn’t speak their minds. Nor am I on a puritanical rant calling for Masons to pretend to be pseudo-angelic paragons of propriety and inoffensiveness. I am not advocating intolerance of Masons being human, and thus liable to behave badly at times despite our best intentions. After all, mercy and forgiveness are very important principles in Masonry. But I am saying there is serious contemplative work that needs to be done by Masons, as individuals and as lodges; the character and quality of our active presence in the world, personally and collectively, emerges from such work. It is work that must be done if Masons are to be more than a club of “good ol’ boy” posturing braggarts using the noble words and titles of our tradition to mask or, even worse, falsely justify baseness, bigotry, and brutality. We are meant to be builders in, of, and for all the virtues, and the greatest of these is love. That should be the ever-present center of contemplation within the circle of our thoughts, attitudes, and actions. 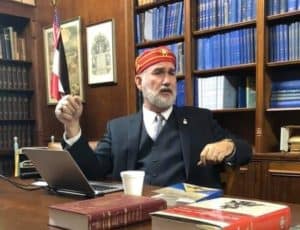